Chris and I planted a variety of tomatoes this year. We planted German Green, Mortgage Lifter, Black Krim, Big Rainbow, Roma, Grape, Cherry, and one other variety I can’t remember the name of.

I love tomatoes and having my own fresh tomatoes to make salsa with, eat on a sandwich, and add to other foods, plus what I smoke and freeze, makes me a happy happy girl.

One thing Chris and I had never tried was Fried Green Tomatoes. We have talked about it every year we have planted tomatoes, but had never, for one reason or another, actually made it. This year, we decided, was the year.

I went to my favorite recipe site, My Recipes, and searched for fried green tomatoes. I came across several recipes but the one that caught my eye was Fried Green Tomatoes with Bread and Butter Pickle Remoulade.

I wanted to use this one because of all of the bread and butter pickles and sweet relish I had canned from our own cucumbers.

You can click the link above to see the actual recipes.

We started by slicing three large German Green tomatoes in fairly thick slices. Then each side was sprinkled with salt and pepper. 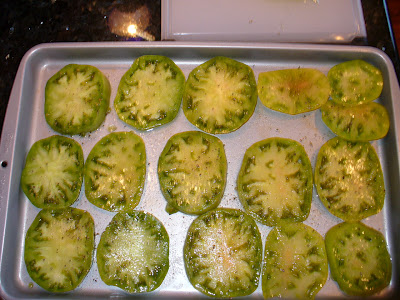 Meanwhile, I had a cast iron skillet with about an inch of vegetable oil heating on the stove. It needs to heat to about 350*, but be careful because if it gets too hot it will start to smoke and burn. This is not good. Also, preheat the oven to 200* and place a rack or pan in there to put your cooked tomatoes on. You will be cooking in batches unless you have the worlds largest iron skillet and you will want to keep the tomatoes warm. I took some foil and put it underneath a wire cooling rack and stuck it in the oven. I didn’t want to drip oil in my oven but I didn’t want the tomatoes to sit in their own oil and get soggy either. ﻿

The  next step is to get the coating ready. This recipe calls for 2 cups flour, 1 cup corn meal, 1 1/2 cups buttermilk and a tablespoon of creole seasoning. I saw that some recipes use an egg instead of buttermilk, and panko instead of cornmeal.
﻿

One cup of flour and the cup of cornmeal are mixed in a shallow dish (pick a rather good sized dish) along with the creole seasoning. In another shallow bowl place the buttermilk, and in a third shallow dish place the remaining cup of flour. 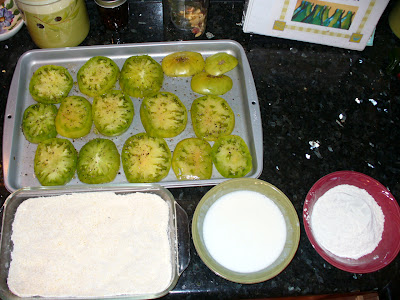 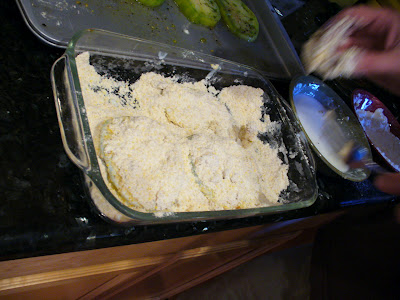 This is messy and you will get gooey, sticky, gross fingers. It is helpful to have a kitchen partner at this point because one person can do the dredging while the other person keeps their fingers clean and does the cooking. 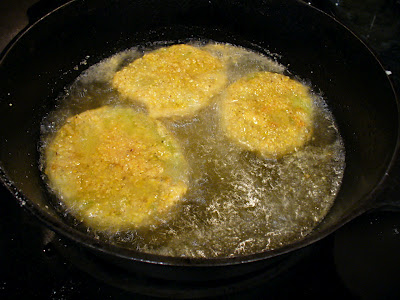 Cook the tomatoes for 2-3 minutes per side. You need to monitor the heat of the oil. Every time you add tomatoes the heat will drop. We have a laser tool that Chris has that gives us a digital instant read that we used to monitor the temperature.

BE CAREFUL when you flip the tomatoes!!! This is HOT boiling oil and it will BURN you if you splatter. Use a fork and a spatula to help ease the tomatoes over without splashing. Once the tomatoes are cooked on both sides use a slotted spatula or spoon to remove them carefully from the oil. I tilted the spatula a bit to let the oil drain off. Place the cooked tomatoes in the preheated oven while you go on to the next batch. I flipped the tomatoes over so that the oil on the top would drain off. I wasn’t looking for oil-sogged fried tomatoes.

Keep cooking the tomatoes in batches until they are all done.

To make the remoulade, which I know sounds a bit interesting flavor-wise, gather your ingredients and mix them all together. Pretty simple.

The recipe calls for one cup mayo, 1/4 cup creole mustard, lemon zest, lemon juice, fresh parsley, fresh chive, hot sauce, salt, pepper and of course, chopped bread and butter pickles. I used a tablespoon of my homemade sweet relish, which is nearly the same as bread and butter pickles, but already chopped. Mix it all together and you have a tasty sauce!

Now that all the tomatoes are cooked and the sauce is ready it is time to eat! 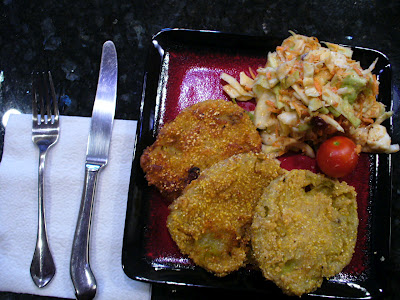 I served them alongside the last of my homemade garden coleslaw.

So how was it?

Very good, if you like tomatoes. 🙂  I thought the deep fried texture and taste reminded me of a BLT sandwich. Chris thought it reminded him of a good tomato soup with crunchy crackers; he went back for seconds.

The tomatoes were excellent both with and without the remoulade. The remoulade was slightly sweet and added a very nice creamy component to the crunchy-fried tomatoes. I would take the time to make it again. I have left overs and can see using it as a dip or as a sandwich spread.

One thing I would do differently is to use a finer grind of cornmeal. I think mine is a medium grind and it made the breading a bit…crunchy. A finer grind would have contributed the good flavor but been less intrusive in the mouth feel of the breading.

Overall, this is a very tasty recipe and one I will make again, but probably not regularly. It is a bit time intensive, more so than what I would typically want to spend on a busy weeknight, and it is fried, which is not the healthiest of options. It is delicious, and Chris and I both agree that it will be on our menu in the future as a treat meal.

Do you like or loathe tomatoes? Have you ever had fried green tomatoes? What is your favorite way to eat tomatoes? I don’t have a favorite. I love them in everything!

This entry was posted on September 19, 2012 by Corrie Beebe in cooking, food, recipes.