I know the rest of the country has been suffering a heat wave and drought, but our summer has been relatively mild. We got a bit of a late start to our hot temperatures, and most days have been beautiful and in the mid 80’s to mid 90’s. Just over the last week or so have we kicked it up a notch and crept into the 100’s.

Since Chris is not on call this weekend, we decided to go on an adventure. We packed up our kayaks (they are Chris’ old whitewater kayaks) and headed south. 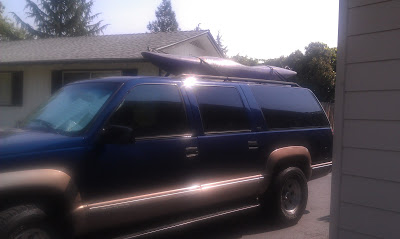 Sorry babe, didn’t mean to cut your face off, but my android phone only has the actual button for the picture on the face side of the phone, making self portraits nearly impossible.

We took off down I5 and the farther south we went the hotter it got.

Did I mention we have no AC in the suburban?

Sometimes ya just need a little In-N-Out. 🙂 Chris got a double double animal style. I just went with a regular add sauce and pickles, no onions. The place was bumpin’! We had to wait for a seat and people were vulturing tables all over the place. Oh, and did I mention it was about 106 degrees?

We were one of a very few cars on the freeway with our windows down.

I guess they have AC. (The AC hasn’t worked in the suburban for…uhm…years. Ten years? A long time. Somehow we manage to take at least one long trip every summer somewhere in a hundred plus degree heat.)

After Redding and In-N-Out we headed north again to escape the heat find a place to kayak. We originally were going to stop at Lake Shasta, but decided after a little googling on my phone to visit Lake Shastina instead.

Lake Shastina is about 10 miles off of I5 at exit 751 just north of Weed, California. It is not a huge lake, but it is tucked away in ranch country in Northern California. There is a campsite on the South end, but it was a little sketchy. I think people were living there. So we headed around the lake and found a nice sandy beach area with walking access. 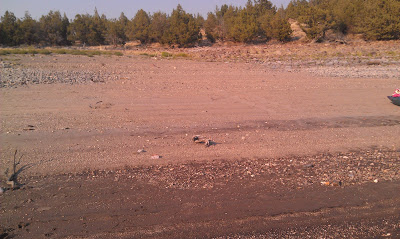 We lugged the kayaks and gear down from the road and spent an hour or so paddling around aimlessly on the smooth water. The lake was darn near empty.The water was calm and warm and it was so peaceful!

After paddling around we headed back to the beach for some more relaxation. 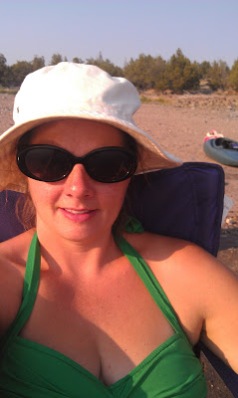 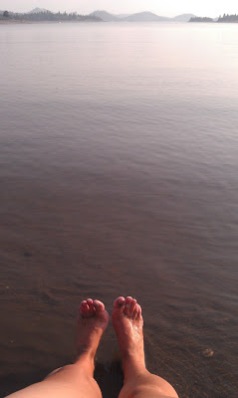 As the sun started to drop lower in the sky we decided it was time to pack up and head north. 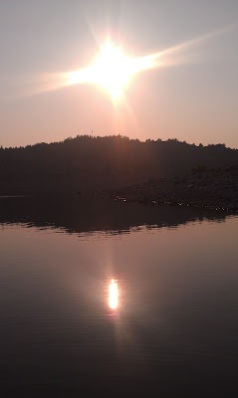 On our way home we were passed (and then we passed them) by a guy hauling a beautifully restored Pontiac GTO. So pretty…

We have a lot of fires going in the surrounding mountains from the thunder storms that came through last weekend. It is making the sky very hazy with smoke. The pictures don’t do it justice, but as we came out of the Siskiyou’s into Ashland and South Medford we were treated to an amazing red fireball of sun.

It was an amazing day. We sweated our way through Northern California to Redding, enjoyed a yummy lunch, went exploring and found an awesome lake to relax by, and saw beautiful scenery on our way home.

It was a sweaty day, but an excellent way to spend our Saturday.

How was your Saturday? Is it hot where you are or are the temps cooling down now?

This entry was posted on August 12, 2012 by Corrie Beebe in adventures.