Hi All! Long time no blog…

A couple of weeks ago I mentioned that the winter blah’s had been taking their toll and I had been feeling pretty depressed. Those feelings were making it hard for me to come up with anything I felt was valuable to post, and let’s face it, depression removes all the motivation to do darn near anything from our lives.

I want to talk more about depression, anxiety and the stigma associated with those topics, because I feel like there is still so much stigma out there that people who are experiencing depression often don’t ask for help. When you are depressed you NEED to ask for help…from your friends, your family, your health care team…It can be the hardest thing in the world to do, but it is necessary!

Today though I’m going to talk about our new desk!

Chris and I, over the course of our ever changing lives, had been using two separate desks, purchased at two separate times, in our home office/computer room. This room is where we spend most of our time. The desk were mismatched, different colors, heights, sizes…everything.

I was sick of it!

I forgot to take before pictures (because I was so excited to get these things out of here!) but if you look past Shanelle in these pictures you can see my desk on the left and Chris sitting at his desk on the right. 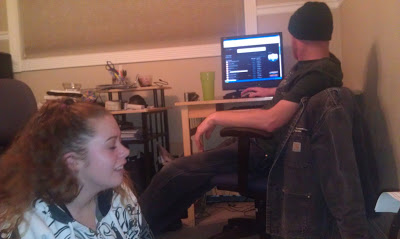 Because I hated my desk set up so much, I never sat there and it just became a catch-all surface for everything…mail, junk, books, whatever. The cats were forever knocking stuff off of there in their less than graceful jumps  up and down from the windowsill.

Chris and I thought about buying one large desk, but desks are  really expensive and to get what we wanted would be several hundred dollars. I’m too cheap for that.
We decided to make our own desk!
First step was to get rid of the old stuff and do some measuring. Chris is locating the studs in the wall in this picture because we are going to mount the desk surface to the wall.

Here is phase one: the mounted support system for the desktop surface. You can see the new desktop in the picture below resting on the carpet. We decided to use a piece of pre-cut 8′ counter top for our desk top. We purchased this at Lowe’s for $80.

The counter got mounted on the wall support with brackets from underneath, in addition to having two floor based supports as well. 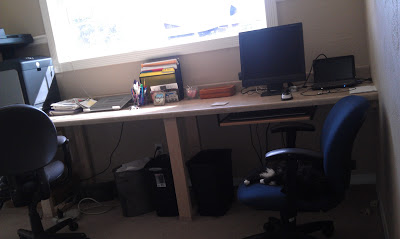 Ta da! One single surface for us to work on! Chris took the keyboard slide out tray off of my old desk and mounted that on his side. I don’t use my wireless keyboard often, so it wasn’t a big concern for me.

It isn’t 100% done yet…we are going to paint or enclose the floor supports so they have a finished look, and I am still organizing my side of the desk. I bought a new file organizer which has made me so happy happy!! It is the little things.

We did have to cut a hole in the counter top/desk top behind Chris’ monitor for cords and so forth, but he just used a hole saw, quick and easy. Another cool thing: we were able to take our 4′ long multi-plug outlet and mount it underneath the desktop rather than having it sit on the floor. That has helped clean up the mess of cords all over.

All told, we spent right at $100 to purchase the wood, screws and counter top. We had some brackets at home and spent a couple more bucks on some additional brackets. We re-used our existing keyboard slide out tray, and I spent $20 bucks on a new desktop file organizer (office stuff is expensive!!).

It took a couple hours total to remove everything, locate studs, measure, mount and install the desk.

We really like having a one piece surface! The room itself looks bigger.

Did you do any projects over the weekend?

This entry was posted on February 25, 2013 by Corrie Beebe in mood, projects.